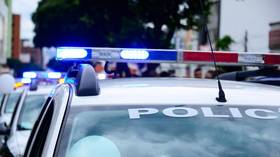 Pennsylvania State Police have charged a 24-year-old man with two counts of homicide after he allegedly drove his vehicle through a crowd at a community fundraiser event on Saturday in the town of Berwick, killing one person. He later presumably beat and killed a woman in a neighboring town.

After the vehicle attack, which left 17 people injured and one dead, Adrian Oswaldo Sura Reyes allegedly assaulted and killed a 50-year-old woman in neighboring Nescopeck before he was ultimately apprehended. He is being held without bail at Columbia County Correctional Facility.

Police were called to the scene of the second murder with reports of a man beating a woman. However, by the time they arrived, she was already dead.

The authorities have yet to determine whether Reyes deliberately targeted the fundraiser – which was being held at the Intoxicology Department Bar to raise money for the family of victims of a house fire in Nescopeck – or whether there was any connection to the second victim. The Nescopeck house fire killed 10 people, including three children, earlier this month.

Three of the victims from the fundraiser were in critical condition as of Sunday morning, while four were in serious condition. Asked by a reporter if he had any comment on the situation, Reyes reportedly responded “Sorry, I’m sorry.”