Defeated Mexican Saul Alvarez is 'too smart' to entertain a second fight, according to Dmitry Bivol's father

The father of WBA light heavyweight champion Dmitry Bivol doesn't believe that Saul 'Canelo' Alvarez will fight his son again after being dethroned as boxing's pound-for-pound champion in the eyes of many pundits and fans.

In a one-sided affair in Las Vegas on Cinco de Mayo weekend, Bivol outclassed 'Canelo' on his way to a unanimous decision upset with the Mexican having now been replaced by Terence Crawford at the summit of ESPN's pound-for-pound list published on Wednesday.

And while 'Canelo' immediately showed interest in a rematch, with Bivol himself offering for it to take place at a more natural super middleweight limit where Alvarez is still the undisputed champion, the Russian's father doesn't think that Alvarez will sign on the dotted line to try and avenge his first defeat since losing to Floyd Mayweather in 2013.

"I'll tell you on my own – Alvarez will never go for a rematch. I do not believe that there will be a second fight, Alvarez is not a stupid guy," Yuriy Bivol claimed to Match TV. 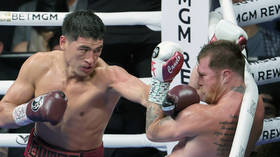 Explaining how Bivol and Alvarez came close to fighting after Alvarez beat Sergey Kovalev in 2019 at light heavyweight before dropping down to 168 lbs, Yuriy Bivol accused Alvarez's camp including current promoter Eddie Hearn of finally choosing Dmitry over the light heavyweight division's other Russian champion in WBC and IBF king Artur Beterbiev as they thought that Bivol would be "easy prey for them".

"But, as our coach said, they miscalculated," Yuriy stressed.

"I'm happy with the fight. The plan worked. The weaknesses of Alvarez, we cut through [them], even when he boxed against [Caleb] Plant and [Callum] Smith," Yuriy went on.

"I don't know why, but they all let him rest. So he goes to the opponent, puts him on his heels or presses him to the ropes and starts throwing power punches, which fly out great from him."

While others usually allow Alvarez to take a step back to catch his breath and recharge after unloading, Yuriy Bivol said that his son, 'Dima', saw this as the perfect time to pounce.

"Of course, for the first four rounds, Dima was a little constrained, but it was the coach who told him to first give him [Alvarez] a wave to look at what was happening, at what was not going on."

Yuriy Bivol revealed that Dmitry's camp had "several plans" for the fight whether they entailed throwing Canelo off his rhythm or going in all guns blazing by engaging the future Hall of Fame star from close quarters.

All of these made Canelo "nervous", Yuriy said, and this was communicated when Canelo even picked Bivol up at one point and threw him over his shoulder.

Yuriy also complained about "a lot of inconveniences" that Canelo's camp created and which would make "any athlete in our place come out very depressed".

"It was written in the contract that the anthem was taken from us, the flag was taken away," Yuriy said, in a nod to restrictions made in relation to Russia's military operation in Ukraine which puzzlingly saw Bivol, who was raised in St Petersburg from the age of 11 onwards after being born in Tokmak, Kyrgyzstan when it was still part of the old Soviet Union, introduced as being from California.

"Then the fight begins – Dima goes out and waits for the Mexican anthem to be sung, then the US anthem, then for Alvarez to come out under his own flag. All this goes on endlessly.

"Dima entered the ring in such a way that he was almost pushed out. Alvarez was raised on some kind of podium. All this is psychologically unpleasant, but in [a rematch], all this will not happen." 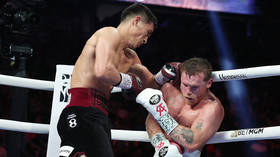 "Moreover, Dima calculated him very well in combat. Now he already understands that Saul Alvarez is a very good boxer, but in his weight category, two weights lower. It is very difficult for him to box with us," Yuriy Bivol concluded.

Though offering to take Alvarez on at super middleweight, Bivol has shown more of an interest in trying to become the undisputed light heavyweight champion by facing the winner of June's bout between compatriot Beterbiev, who he has backed to win, and WBO ruler Joe Smith Jr.

"First of all, it’s an interesting fight," Dmitry Bivol said to DAZN. "Of course, he [Beterbiev] has more chance: he has more power and boxing skills – a little better than Smith.

"He has much more fights in the amateurs which makes you more skilled, to give you more experience. Joe Smith still has the power and a big heart, it’s an interesting fight.”

"Of course I want to fight the winner of this fight," Bivol confirmed.

With Bivol rumored to have been paid a guaranteed $2 million and 30% of PPV sales, and probably even more for a rematch with Canelo or a unification bout with either Beterbiev or Smith Jr, the 31-year-old born to a Moldovan father and mother of Korean ethnicity has hit the big time out of humble beginnings. 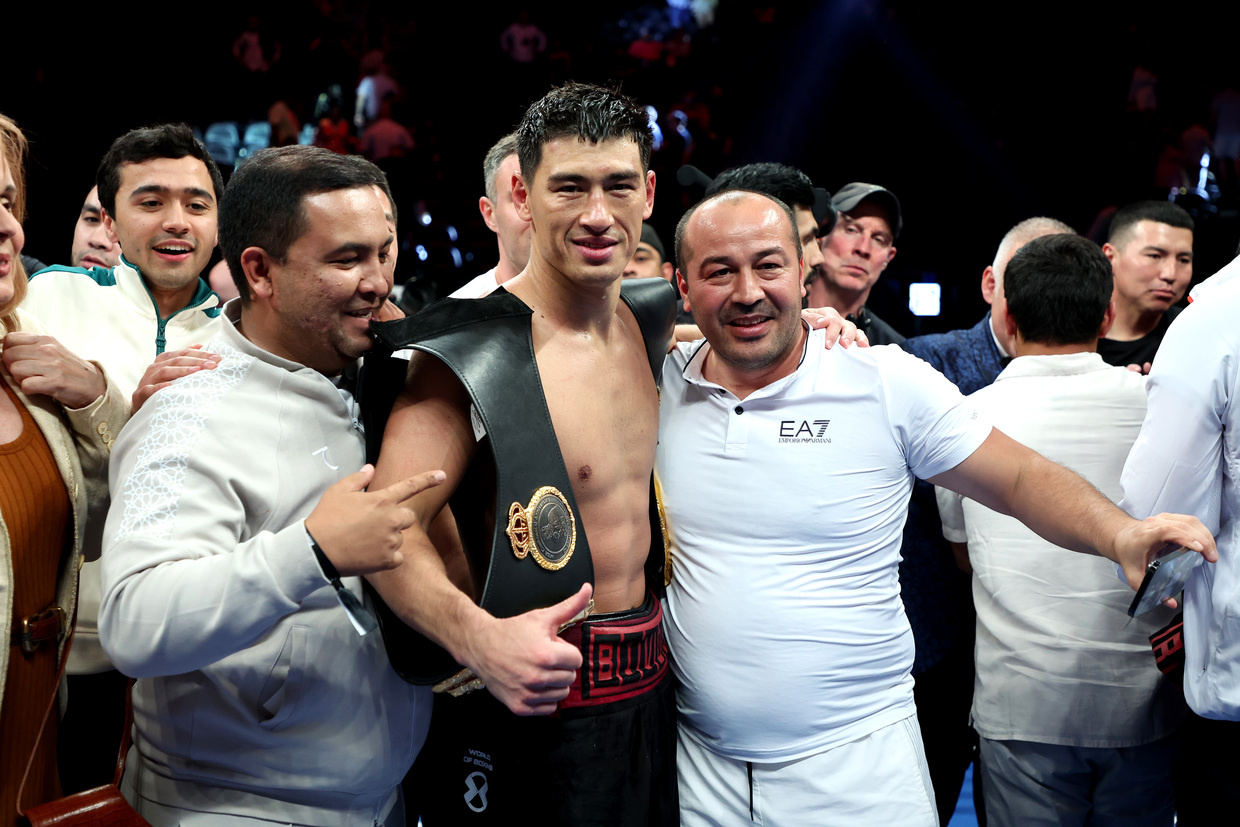 To Match TV, Yuriy Bivol, who served in the special airborne forces in Germany, lifted the lid on Dmitry's upbringing after he took up boxing aged seven while the family still lived in Tokmok and worked as farm hands.

Given he was bigger than most kids his age, meaning his coach struggled to find opponents of the same size and weight, Dmitry would often fight older boys with the promise of throwing in the towel if he was evidently struggling which didn't prove necessary.

Respected by his peers, Bivol didn't fight much at school as many others there also went to his gym. After his coach in Tokmok advised the family to move to Kazakhstan or Russia to further develop Dmitry's talent after he began winning medals, the Bivols ended up moving to St Petersburg two years after Yuriy first went alone in 2000 to find a good gym for his son.

With Yuriy's brother and his wife and two children joining them, nine of the Bivol clan lived together in a two-room apartment while Yuriy worked as a bus driver on the 135 route.

"Like a zombie, you work," Yuriy said, explaining that he would work double shifts to make ends meet and sleep when he could for a couple of hours between them.

Finally settling on the Palace of Pioneers gym for Dmitry, the youngster was told to lace up his gloves in his first session without background questions or even a warm up.

Thinking he had made a mistake and on the verge of walking out, Yuriy was accosted by a senior coach, Aleksey Fedorovich Kurenkov, who asked him if he came from Kyrgyzstan and if he had brought "the boy".

Advising Yuriy to take Dmitry up to the third floor and work with a top trainer in Isaev Nikolai Petrovich, Dmitry was transferred to the main group of talented pugilists and began to compete. 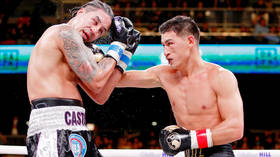 After Isaev moved to a different gym in 2011, Dmitry switched to fight under the tutelage of Gennady Yuryevich Mashyanov who changed Bivol's style and molded him into a professional.

Putting Bivol in training camps in the USA to spar with pros in 2014, Yuryevich told the Bivols that Dmitry had what it takes and should start gradually in the paid ranks.

"Then, in a year or two, take the title and then see how it goes," Yuriy said Mashyanov had suggested.

Between these events, Bivol had also gotten married, won two Russian championships and began to build a house for him and his wife on a small plot of land near the airport.

In 2017, he was then elevated from interim status to become the WBA's full light heavyweight champion when all-time great Andre Ward vacated, and hasn't looked back since with more big paydays on the way.

"And so it happened, as if he had seen the whole plan in a dream," remarked Yuriy of Mashyanov's blueprint, which has thus far proven true in fairytale fashion with one of modern boxing's biggest upsets now also under Dmitry's belt.