The shipment was reportedly refused in Lebanon due to a five-month delivery delay, Bloomberg reports 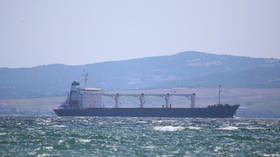 The first grain cargo to leave Ukraine’s newly reopened ports has been rejected by a buyer in Lebanon due to a five-month delay in shipment, Bloomberg reported on Monday.

According to the outlet, citing Ukraine’s embassy in Beirut, the Sierra Leone-flagged vessel the Razoni, which was loaded with about 26,500 tons of corn, is currently in the Mediterranean.

The Lebanese government reportedly is not involved with the shipment, as the cargo was bound for the private sector.

A new buyer is being sought for the grain in Lebanon or elsewhere, according to the Ukrainian embassy. The vessel’s destination changed on Sunday from Tripoli to “awaiting orders,” ship-tracking data showed.

The Razoni was the first civilian freighter to carry Ukrainian grain via the Black Sea in months. Regular shipments were blocked amid hostilities between Russia and Ukraine who blamed each other for the disruption.

An agreement between Russia and Ukraine for restarting sea exports was negotiated last month with the help of Turkey and the UN. Turkey is also hosting a special center to coordinate shipping under the deal, which includes representatives from Moscow and Kiev. Their job is to inspect vessels to prevent the smuggling of weapons in or out of the conflict zone.