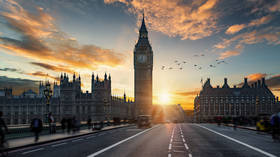 The UK economy contracted between July and September, with GDP dropping by 0.2%, the Office for National Statistics (ONS) reported on Friday. The drop was the biggest quarterly decline in the country’s economy since early 2021, when it went into lockdown amid the Covid-19 pandemic.

While analysts had previously warned of a bigger drop in the country’s GDP, the result still shows the UK economy is suffering, largely due to the cost-of-living crisis and related interest rates hikes, which tend to slow growth.

According to experts, if the British economy continues to contract in the final quarter of the year, as is widely expected, it would enter a recession, having recorded two consecutive quarters of negative growth.

Commenting on the data, the UK’s new chancellor of the Exchequer, Jeremy Hunt, said the country is facing some tough decisions to bring the economy back to stability.

“We are not immune from the global challenge of high inflation and slow growth… I am under no illusion that there is a tough road ahead – one which will require extremely difficult decisions to restore confidence and economic stability. But to achieve long-term, sustainable growth, we need to grip inflation, balance the books and get debt falling,” the official stated.

Hunt is now expected to make his first fiscal statement as chancellor next week, when he will lay out the measures intended to put the economy back on track. These will reportedly include large spending cuts, new taxes, and hikes of existing taxes.