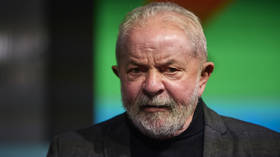 Brazilian presidential candidate Luiz Inacio Lula da Silva called out US President Joe Biden in two campaign speeches this week, citing the $40 billion in military aid Washington has pledged to Ukraine. Lula is polling far ahead of the incumbent, Jair Bolsonaro, in the upcoming presidential election.

“Biden, who has never made a speech to give $1 to those who are starving in Africa, announces $40 billion to help Ukraine buy weapons,” Lula said on Wednesday in Porto Alegre. “This can’t be!” he added.

The 76-year-old is the candidate of the leftist Party of Workers (PT), and currently the favorite to win the presidential election in October.

Speaking in Sao Paulo on Tuesday, Lula brought up the $40 billion in another context. How is it possible, he asked, that the world’s supposedly strongest economy is reduced to scouring the globe for baby formula – amid shortages in the US – even as Biden pledges billions in weapons sales to Kiev?

About half of the $40 billion package is directly earmarked for US weapons headed to Ukraine, while the rest would fund the government in Kiev, replenish the depleted Pentagon stockpiles, and fund US military deployments in Europe. Biden signed it on May 21 after both chambers of Congress passed it with token Republican opposition. The physical bill was flown to Asia, where Biden was visiting at the time, so he could formally attach his signature.

Lula has previously criticized Biden over the conflict in Ukraine, saying the US leader could have prevented it, but instead chose to give a blank check to Ukrainian President Volodymyr Zelensky.

“The United States has a lot of political clout. And Biden could have avoided [the conflict], not incited it,” Lula said in an interview with Time magazine in early May. 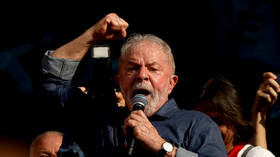 “And now we are going to have to foot the bill because of the war on Ukraine. Argentina, Bolivia will also have to pay. You’re not punishing [Russian President Vladimir] Putin. You’re punishing many different countries, you’re punishing mankind,” he added.

Lula was president of Brazil from 2003 to 2010 and remains one of the most popular Brazilian politicians ever. He was convicted on corruption charges and jailed in 2018 – during the interim presidency that had impeached his successor, Dilma Rousseff – but the conviction was annulled in 2021. The Brazilian Supreme Court ruled that Lula did not receive a fair trial, and cleared him to run for office again.

The most recent polls by Datafolha show Lula with a 21-point lead over Bolsonaro.