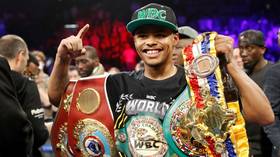 Boxing pound-for-pound hopeful Shakur Stevenson had a hectic evening on Saturday that saw him become the WBO, WBC and The Ring super featherweight champion, propose to his girlfriend, and then step in to stop a mass brawl that allegedly saw his mother attacked by two women.

The 24-year-old protege to Terence Crawford put on a masterclass at the MGM Grand Arena in Las Vegas as he dethroned Oscar Valdez and handed the Mexican his first defeat in a heavily one-sided unanimous decision win (118-109, 117-110 and 118-109) that also took in a sixth-round knockdown.

In the minutes after his defensive exhibition complemented by an excellent southpaw jab and powerful shots to the body, Stevenson revealed that he wants to become an undisputed champion in his current division.

"I'm a superstar in this sport. I want to collect all the belts at 130 and become undisputed. I deserve to be a superstar, so that's what I gotta do," he said, adding that he told himself, "I'm gonna shut [Valdez's fans] up," and "heard crickets" as the fight went on and a raucous Mexican-American crowd was silenced.

The hostile reception Stevenson received didn't stop him from getting down on one knee either and proposing to his girlfriend and the mother of his baby daughter Leilani Asha.

Rapper Young Lyric was stunned by the public show of affection and willingly obliged, but an eventful night for Stevenson and his family wasn't done there.

Sat backstage taking questions at a post-fight press conference, Stevenson was asked by ESPN correspondent Mike Coppinger if he deserved to be on the pound-for-pound list following his latest expert display.

"What you think?" the Newark native responded. Yet before he could expand further, Stevenson had to turn his head towards a fracas taking place out of shot and then rushed off the stage to break it up while leaving his belts behind.

A separate clip of the incident shows Stevenson being dragged away from the mass brawl that storms down the corridor of the MGM Grand.

As one member of Stevenson's entourage lays vicious shots into another man on the ground, security tries to halt the melee that resulted in the press conference had to be canceled.

The guards eventually manage to contain the trouble to some extent as Stevenson's associate is pushed through a set of doors then closed behind him.

According to Coppinger, two women were accused of attacking Shakur Stevenson’s mother Malikah though other reports say the confrontation found Stevenson's family and team in a feud with security.

Still the additional violence should not put a dampener on what was one of the greatest nights of Stevenson's young life thus far. 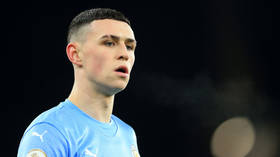 While going after WBA champion Roger Gutierrez and IBF king Kenichi Ogawa appear to be next on his itinerary, the pugilist prodigy is also interested in meeting WBC ruler at 135lbs Devin Haney if he becomes the undisputed lightweight champion in Australia next month by relieving George Kambosos of most of the other pieces of the lightweight crown.

"Devin is definitely a huge fight for me; Devin is a helluva fighter. We can line it up in the future," said the Rio 2016 silver medalist.