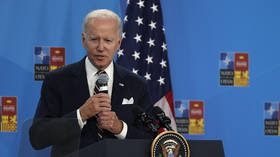 US President Joe Biden wants the Senate to get rid of the filibuster rule in order to pass abortion legislation, he told reporters on Thursday at the NATO summit in Spain. He may lack the votes, however, as two prominent Senate Democrats said later in the day they would be opposed.

Biden was in Madrid to meet with the heads of other NATO countries, officially invite Sweden and Finland into the alliance, and pledge more weapons and money to Ukraine’s war against Russia. During his short press conference, however, American reporters asked him about last week’s decision by the US Supreme Court to overturn Roe v. Wade, a 1973 precedent that had declared abortion a constitutionally protected right.

His official twitter account posted a statement to the same effect a little later. The filibuster rule requires that 60 senators vote for a proposal before it can pass, preventing the Senate from approving legislation by a simple majority as the House of Representatives does. 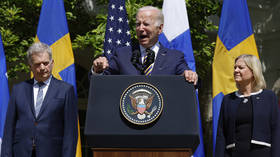 The Senate is currently split evenly, with Vice President Kamala Harris acting as a tie-breaker in 50-50 votes. Biden’s Democrats tried to legalize abortion last month, after someone leaked the draft decision of the Supreme Court ahead of the ruling. The May 12 vote failed 49-51, as Senator Joe Manchin (D-West Virginia) sided with the Republicans against the “Women's Health Protection Act.”

Manchin told the Daily Mail on Thursday that his position on the filibuster had not changed since. When asked about it, the office of Senator Kyrsten Sinema (D-Arizona) reissued her statement from last month calling the filibuster “more important now than ever.”

The Supreme Court’s decision last Friday returned the issue of abortion to state legislature and declared that Roe v. Wade rested on an “egregiously wrong” and “exceptionally weak” interpretation of the Constitution.

Biden’s reaction was to call the court’s conservative majority “extreme” and out of touch, and say that the ruling made the US “an outlier among developed nations in the world.” He repeated the condemnation in Madrid on Thursday, arguing that the verdict was “destabilizing” and “a mistake.” He also urged Democrats to “vote, vote, vote. That’s how we’ll change it.”

Both during his 36 years in the Senate and on the presidential campaign trail, Biden has previously opposed ending the filibuster. In 2019, he told reporters that it would be “a very dangerous thing to do.” In a 2005 speech on the Senate floor, he denounced Republican calls to end the filibuster as a “fundamental power grab by the majority party.”