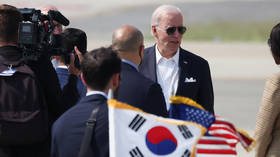 Asked by a reporter if he had a message for North Korean leader Kim Jong-un, US President Joe Biden succinctly replied “Hello. Period” on Sunday, his last day in South Korea before moving on to the Japanese leg of his Asian trip. 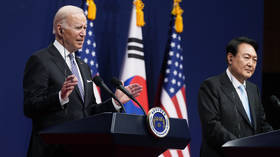 The not-quite-message followed Biden's acknowledgment that he would consider meeting with Kim so long as the DPRK head was “sincere” and “serious” about discussing the winding down of Pyongyang’s nuclear program. The president insists he is “not concerned” about the possibility of new North Korean nuclear tests, claiming the US is “prepared for anything North Korea does.”

Despite the president’s own words, his administration is reportedly concerned that Kim plans to launch a ballistic missile or conduct a nuclear test while the president is traveling in Asia. While the country has not conducted any nuclear tests since 2017, National Security Advisor Jake Sullivan has warned there is a “genuine possibility” that Pyongyang could begin testing such devices again during or after Biden’s trip.

The president arrived in Asia on Thursday for his first trip to the continent since being elected in 2020. After three days in South Korea, he visited the country’s Osan Air Base, hailing members of the US and South Korean military who are tasked with monitoring the nuclear threat from the North.

Biden issued a joint statement with South Korean President Yoon Suk-yeol declaring that the two countries had planned to “expand the scope and scale of combined military exercises and training on and around the Korean Peninsula.”

The controversial drills were scaled back under former President Donald Trump in an effort to improve Washington’s relationship with North Korea. However, despite two much-hyped summits between the US and DPRK leaders, no lasting agreements on the subject of sanctions or denuclearization were reached.

Biden has returned to the more hostile posture of his predecessors toward North Korea, and Kim has responded in kind by firing off 15 ballistic missiles this year alone, warning that the DPRK not only has a “firm will” to continue with its nuclear program but will use such weapons “preemptively” if needed. Incoming South Korean President Yoon similarly ran on a more hawkish platform than his predecessor Moon Jae-in.