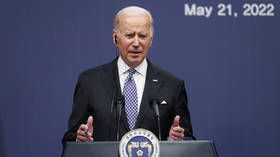 US President Joe Biden signed into law a massive $40 billion military and economic aid package for Ukraine on Saturday. Biden inked the document during his visit to South Korea.
The document, titled the “Additional Ukraine Supplemental Appropriations Act 2022,” was flown to Seoul specifically for Biden's signature. The move appears to have been more symbolic than practical, as the US President could have legally have directed a subordinate to affix his signature.

The legislation was passed by the US Senate on Wednesday, receiving the overwhelming support of 86 senators against 11. All of the senators who opposed the bill were Republicans. 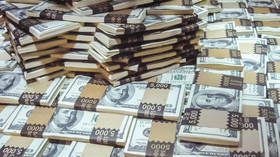 Under the act, the US will provide nearly $20 billion worth of military aid to Ukraine to assist the country in its fight against Russia. The sum includes military hardware and funds to pay salaries to Ukrainian troops, along with money to pay US troops deployed in Europe and replenish US stocks of arms already sent to Ukraine.

Russia attacked Ukraine in late February, following Kiev’s failure to implement the terms of the Minsk agreements, first signed in 2014, and Moscow's eventual recognition of the Donbass republics of Donetsk and Lugansk. The German- and French-brokered protocols were designed to give the breakaway regions special status within the Ukrainian state.