US President wants to provide additional funds for Ukraine, as well as powers to seize and sell assets of wealthy Russians 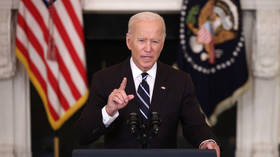 US President Joe Biden has asked Congress for an additional $33 billion in funding to prop up Ukraine in the ongoing conflict with Russia. A vast part of the massive package – some $20.4 billion – is destined for additional military and security aid, while the rest will be used for economic and humanitarian assistance, American media reported, citing senior administration officials.

“Though we expect our NATO allies and EU partners will be making even larger collective contributions than the United States, there is no doubt that continuing to support Ukraine in this war against Russian aggression will require a substantial additional investment on our part,” the president reportedly wrote in his letter to Congress. The US administration wants the aid package to get designated as emergency spending, so that it does not have to be offset by spending cuts elsewhere.

Apart from the massive aid package for Ukraine, Biden is also seeking new powers to target wealthy Russians the US administration believes to be ‘oligarchs.’ “President Biden will send a proposal for a comprehensive legislative package that will enhance the United States Government’s authority to hold the Russian government and Russian oligarchs accountable for President Putin’s war against Ukraine,” the White House said in a statement.

If enabled, the proposed powers would allow US authorities to “streamline the process for seizure of oligarch assets,” to sell them and to funnel the proceeds to Ukraine.