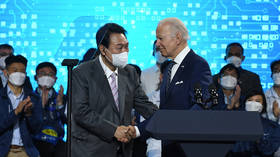 US President Joe Biden mixed up the names of the current and former South Korean leaders during a trip to tech giant Samsung’s chip manufacturing plant in Pyeongtaek on Friday. He thanked “President Moon” before correcting himself to “Yoon,” referring to South Korean President Yoon Suk-yeol, who replaced Moon Jae-in earlier this month. 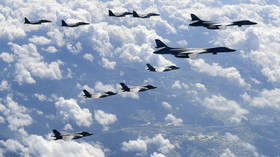 Biden called the chipmaking plant, which will serve as the model for a $17 billion facility Samsung plans to open in Texas in late 2024, “emblematic of the future cooperation and innovation that our nations can and must build together.”

Yoon concurred, hailing it as “a great opportunity to re-highlight the meaning of semiconductors for the economy and security” and praising the “economic and security alliance based on our partnership for advanced technologies and global supply chains.”

A massive semiconductor shortage has plagued the world’s high-tech industries since the Covid-19 pandemic saw governments shutter factories, leading to dire disruptions in supply chains. With much of the industry’s supply coming out of China, the US and its allies have scrambled to source critical parts from elsewhere, belatedly denouncing their own dependency on Chinese manufacturers as a national security risk.

Biden’s first presidential trip to East Asia ran into trouble before he even arrived in Seoul. One of his security officers was reportedly arrested on Thursday and charged with assaulting a South Korean citizen in the capital city. The individual allegedly works for the Department of Homeland Security. He has reportedly been placed on administrative leave along with another Secret Service agent.