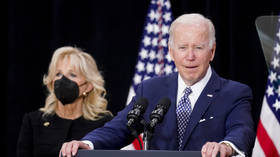 President Joe Biden on Tuesday condemned the racially-motivated attack on a supermarket in Buffalo, New York, as “simple and straightforward terrorism,” and condemned the shooter’s racist worldview.

Biden spoke in Buffalo after meeting with the families of the 10 shoppers and employees slain by a teenage gunman at a grocery store on Saturday. The gunman, who was captured alive, live-streamed his rampage and posted a 180-page manifesto online detailing his white supremacist views. Three others were injured, and 11 of the 13 shot in total were black.

“We have to refuse to live in a country where black people going about a weekly grocery shop can be gunned down by weapons of war deployed in a racist cause,” Biden declared, with “weapons of war” referring to the AR-15 style rifle used by the gunman.

“What happened here is simple and straightforward,” he continued. “Terrorism. Domestic terrorism” 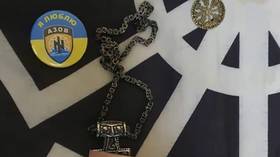 Biden said that the US should respond by keeping “assault weapons off our streets” and by addressing “the relentless exploitation of the internet to recruit and mobilize terrorists.” Gun control and internet censorship are two policy proposals that the Biden administration has pushed since his inauguration last year, albeit with limited success.

Biden addressed the contents of the shooter’s manifesto, particularly his insistence that white people are being “replaced” in the US by non-white immigrants.

Blaming the shooting on “the hate that through the media and politics and the internet has radicalized angry, alienated, lost and isolated individuals into falsely believing that they will be replaced…by people who don’t look like them,” Biden declared “I not only do reject the lie, I call on all Americans to reject the lie.”

The idea of a ‘Great Replacement’ was also referenced in the manifesto of Brenton Tarrant, who killed 51 people at two mosques in New Zealand in 2019. While it is often described as a racist “conspiracy theory,” the white population in the US is indeed shrinking relative to that of non-whites, and this fact has been celebrated by liberal pundits and by Biden himself.

The shooter’s manifesto also features the ‘sonnenrad,’ or ‘black sun’, symbol, which is used by the Azov Regiment of Ukraine’s military, and is referred to as a neo-Nazi “hate symbol” by Jewish advocacy groups.

Biden was not the only political leader to blame the shooting on hatred supposedly spread by pundits and politicians. Former Republican conference chairwoman Liz Cheney and Rep. Adam Kinzinger, who both regularly vote with Democrats, blamed their fellow Republicans, with Cheney accusing the House GOP leadership of enabling “white nationalism, white supremacy, and anti-semitism.”

However, Alex deGrasse, a senior adviser to current Republican Conference Chairwoman Elise Stefanik, called attempts to blame the GOP “a new disgusting low for the Left, their Never Trump allies and the sycophantic stenographers in the media.”