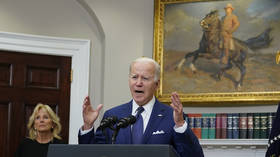 US President Joe Biden called for more gun control in his first comments on the elementary school massacre in Uvalde, Texas on Tuesday. While little is known about the attacker or his motives, the local authorities have confirmed the deaths of 18 children ages 7-9 and one teacher.

“To lose a child is like having a piece of your soul ripped away,” Biden said, implicitly referring to the death of his own son Beau in 2015, and asking America to pray for all the parents of the dead.

He then called for gun control, denouncing the “gun lobby” and demanding “common sense” laws. “I am sick and tired of it. We have to act,” Biden said.

Biden spoke shortly after a 17-hour flight back from Asia, during which he had been informed of Tuesday morning’s massacre. He pointed out that other countries also have mental health problems and domestic disputes, but rarely have such mass shootings – suggesting the problem was America’s gun ownership.

“Why are we willing to live with this carnage?” he said. “It’s time to turn this pain into action.”

Biden has called for gun control almost from the start of his presidency. In a February 2021 speech, on the third anniversary of the massacre at a Parkland, Florida high school, Biden called for an “assault weapons” ban and condemned “gun manufacturers who knowingly put weapons of war on our streets.”

Texas authorities have confirmed that 18 children and one teacher were killed at the Robb Elementary School in Uvalde on Tuesday. The attacker, identified as 18-year-old local resident Salvador Ramos, was also killed – reportedly by a US Border Patrol agent who responded to local police’s request for help. The small community of 15,000 is located west of San Antonio, near the US-Mexico border.

The Uvalde shooting is the second-worst elementary school massacre in the US, exceeded only by the 2012 death of six adult staff members and 20 children at the Sandy Hook Elementary in Newtown, Connecticut.