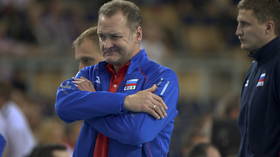 Russian volleyball coach Andrey Voronkov will be banned for up to two years after being found guilty of referring to a black player as a “monkey,” but the former national team trainer has refused to apologize for the incident.

The comments from Voronkov came during a Russian Women’s Super League game earlier this month, where his Lokomotiv Kaliningrad team were taking on Uralochka-NTMK in a championship decider.

During a timeout, Voronkov was caught on camera pulling Lokomotiv player Valeriya Zaitseva aside to give her advice, telling her: “Why are you catching this monkey again?”

The comments were widely taken as a reference to black Uralochka star Ailama Cese Montalvo, who hails from Cuba. 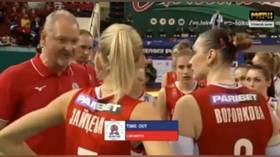 The Russian Volleyball Federation held a hearing of its Disciplinary Committee on Thursday, attended by Voronkov and at which it was announced that he would be banned for a period of up to 24 months.

“The disciplinary commission considered it appropriate to apply a sanction to Voronkov in the form of a sports disqualification for up to two years,” read a statement.

It added that Voronkov was found guilty of “committing a disciplinary violation, expressed in offensive terms towards a member of the opposing team.”

“Due to the wide public outcry, the question of a specific period and conditions for disqualifications will be brought to the next meeting of the Executive Committee.”

The statement from the Russian Volleyball Federation added that “despite the obviousness of the situation” neither Lokomotiv nor Voronkov were willing to apologize personally to Montalvo, and had instead attempted to suggest that the claims were based on media hysteria.

“From the side of the club, a letter was sent to the [Russian Volleyball Federation], which was presented in a legal style and shifted the focus of attention to groundless accusations of racism by the media and the public against Voronkov,” read the statement.

An Executive Committee meeting is scheduled for May 31 to determine Voronkov’s exact fate.

The initial incident triggered outrage among the Ekaterinburg-based Uralochka, who demanded an immediate apology from Voronkov.

One official also claimed there would be an “international scandal” when the remarks were inevitably picked up in Montalvo’s Cuban homeland.

Montalvo herself took to social media to say that she would rise above the comments and would not “fight evil with evil.”

It has since been announced that the 21-year-old will be leaving Uralochka, although the step is not said to be related to the apparent slur from Voronkov.

Voronkov, 54, was head of the Russian men’s national team between 2013 and 2015 and represented his country during his days as a player.

He was on the way to coaching Lokomotiv to a second successive Russian Super League title when the scandal broke, as his team earned a five-set victory over Uralochka in Kaliningrad which meant they sealed the championship series 3-2 overall.

The row has come to overshadow that achievement, with reports that Voronkov’s potential candidacy for a return to the role of men’s national team head coach is now out of the question.