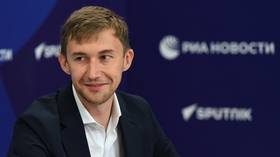 Russian chess grandmaster Sergey Karjakin has been presented with the ‘Order of Merit to the Fatherland’ for his services to his country. Karjakin is currently banned from international competition by chess authority FIDE for his vocal stance in support of Russian President Vladimir Putin and the military campaign in Ukraine.

Karjakin, 32, was presented with his award by Russian Sports Minister Oleg Matytsin at a special ceremony on Friday ahead of ‘Athlete’s Day’ in Russia, which is marked annually on the second Saturday of August.

Karjakin was awarded the second class of the honor, while other Russian athletes such as swimmers Mikhail Dovgalyuk and Aleksandr Krasnykh – medalists at the Tokyo 2020 Olympics – were also among those feted.

“I would like to congratulate everyone on our professional holiday, in times of difficulties we unite even more, we become tougher in the international arena,” said Matytsin. 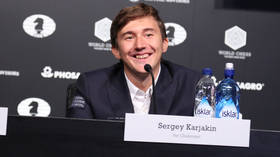 “Everyone is looking at us, they want to crush us, impose sanctions, but we are like a spring – the longer you press, the more it repels.

“Victories at the Olympic Games are an example of our work, how we sincerely know how to trust each other, I sincerely congratulate everyone.”

Amid widespread sanctions for Russian athletes, chess star Karjakin was personally targeted by governing body FIDE for his stance on Moscow’s military operation in Ukraine.

Born in Crimea, Karjakin previously represented Ukraine but switched allegiances to Russia in 2009.

He supported the reunification of his home peninsula with Russia in 2014, and in late February of this year penned an open letter to President Putin expressing his full backing for the military operation.

FIDE announced in March that it was banning Karjakin for six months, while other Russian players are allowed to compete as individuals at international competitions under neutral status.

A world title challenger in 2016 and former blitz and rapid chess world champion, Karjakin has not wavered in his support for Putin and the Russian armed forces’ campaign.

“I won’t deny, it’s unpleasant. But, even if I could turn back the clock, would I write words of support again? Of course I would. I repeat, I could not remain indifferent,” Karjakin said back in March.