The presence of Armenian troops and “illegal armed groups” in “the territories of Azerbaijan” remains a threat, Baku has said 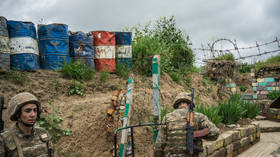 The “demilitarization” of Nagorno-Karabakh remains an “absolute necessity,” the Azerbaijani Defense Ministry said on Wednesday, as Baku carried out ‘Operation Revenge’ in the disputed region amid the latest spiral of tension between Azerbaijan and Armenia.

Baku has “repeatedly stated” that the continued presence of the Armenian troops and “illegal Armenian armed groups” in the “territories of Azerbaijan” remains a “source of danger,” the statement said, adding that Azerbaijan considers the “complete withdrawal” of Armenian forces and disarmament of the local militias an absolute necessity. 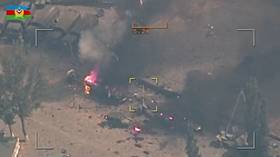 The statement came as Azerbaijan conducted a military operation in the region, one which it claims was launched in response to a “gross” ceasefire violation by local militias that allegedly sought to establish new combat positions in the area. The alleged attack was repelled by the Azerbaijani forces that, in turn, seized some commanding heights in the region for themselves, the statement added.

Tensions in Nagorno-Karabakh have been running high since the beginning of the week as both Baku and Yerevan accused each other of military provocations, including attacks and “intense” shelling. Armenian media outlets earlier reported that Baku had been planning an offensive on the so-called Lachin Corridor – a mountainous pathway connecting Armenia to the region.

Armenian Security Council Secretary Armen Grigoryan also told the local media on Wednesday that Baku demanded Yerevan stop using the Lachin Corridor altogether and choose a different route that could link it to Nagorno-Karabakh. Grigoryan blasted the demands as violating a 2020 ceasefire accord the two sides agreed to following Russian mediation.

In 2020, the world witnessed the latest major flare-up of the simmering conflict between the two neighbors as Yerevan and Baku fought a 44-day-long war, during which Azerbaijan managed to capture parts of Nagorno-Karabakh. The conflict eventually ended with a ceasefire that saw Russian peacekeepers deployed to the disputed region, including the Lachin Corridor, but the situation has remained tense ever since. 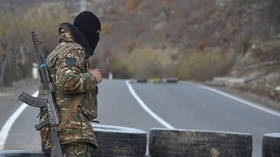 Both sides have repeatedly accused each other of provoking hostilities. Since Monday, both Baku and Yerevan have confirmed military casualties in the wake of clashes in the region. The Russian peacekeeping center also said it recorded ceasefire violations, adding that the Russian troops took measures to resolve the issues peacefully in cooperation with both the Armenian and the Azerbaijani sides.

The region remains a hot issue for both Armenia and Azerbaijan. June saw massive protests against Pashinyan in Yerevan and his government’s stance on Nagorno-Karabakh – one of the major points of contention at the time. Prior to the protests, opposition parties wanted parliament to adopt a declaration saying the region would never be part of Azerbaijan. However, pro-Pashinyan lawmakers refused to attend the parliamentary session.

On Wednesday, the EU urged both sides to stop the hostilities and return to the talks. “It is essential to de-escalate, fully respect the ceasefire and return to the negotiating table to seek negotiated solutions,” it said in a statement.