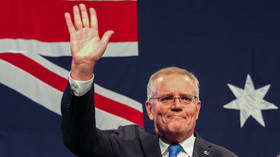 Australian Prime Minister Scott Morrison has admitted defeat following the country’s federal elections on Saturday, calling Labor Party chief Anthony Albanese to congratulate him on his victory. The PM conceded in a televised speech from Liberal headquarters in Sydney, adding that he would stand down as the party’s leader.

“On a night like tonight it is proper to acknowledge the functioning of our democracy. I have always believed in Australians and their judgment, and I’ve always been prepared to accept their verdicts, and tonight they have delivered their verdict,” Morrison said.

The Liberal Party lost more than 12 seats during the election. While vote counting had not been completed at the time of Morrison’s concession speech, the Labor Party’s victory appeared certain, winning at least 72 of the parliament’s 151 seats. Morrison’s Liberals nabbed just 54, while independents and third parties – led by the Greens, who secured their best election results yet – have netted 11 thus far, according to ABC. Labor needs 76 seats to form a majority government. 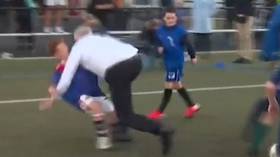 Morrison, who served just one term in office, was not the only prominent Liberal to lose out in the election. Treasurer Josh Frydenberg, viewed as Morrison’s most likely successor, was also knocked out of his post.

Morrison’s conservative government had been widely panned going into the election for what many viewed as its abysmally poor handling of the Covid-19 pandemic and natural disasters, specifically the devastating fires that preceded the coronavirus outbreak.

Albanese thanked his constituents for “vot[ing] for change,” ticking off several policy points in his victory speech with promises to “end the climate wars,” launch a “national anti-corruption commission,” strengthen the country’s healthcare and aged care, and turn Australia into a “renewable energy superpower.” His win is the first victory for Labor since 2007.