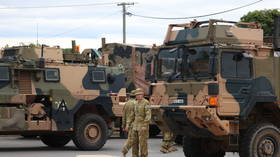 Australia announced on Wednesday it will conduct a Defense Strategic Review of the Armed Forces for the first time in a decade. It comes amid heightened Asia-Pacific tensions over US House Speaker Nancy Pelosi’s visit to the self-governed island of Taiwan, despite Chinese warnings.

Speaking at a press conference in Canberra, Prime Minister Anthony Albanese said the review is intended to “prepare Australia to effectively respond to the changing regional and global strategic environment and ensure that Defence's capability and force structure is fit for purpose, affordable, and delivers the greatest return on investment.”

The review will define the country’s defense posture for approximately a decade, and be led by Professor Stephen Smith, a former defense and foreign affairs minister, along with Angus Houston, a former chief of the Defence Force.

Speaking at the same press conference, Houston explained that the security circumstances “have changed dramatically over the recent past,” and becoming the worst he has seen in his “career and life time.”

“A land war in Europe, all sorts of issues in north-east Asia, particularly around Taiwan, east China Sea, issues in South-East Asia and issues up on the Himalayan border and northern India,” he explained.