Dmitri Vrubel was hospitalized last month with complications from Covid-19 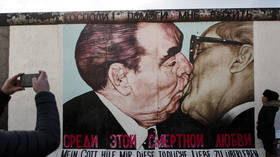 The man who painted the world-famous Berlin Wall mural commonly known as ‘The Kiss’, which became a symbol of the end of the Cold War, passed away at the age of 62 on Sunday night.

Dmitri Vrubel was born in Moscow and had lived in Berlin since 2010. His most iconic work is graffiti on a remnant of the wall titled ‘My God, Help Me to Survive This Deadly Love’, which depicts a kiss between Soviet leader Leonid Brezhnev and Erich Honecker, who led the former East Germany. The mural was inspired by a photo from a meeting between the two.

The graffiti was painted in 1990, just months after the Wall fell, and the reunification of Germany took place by the end of the year.

“For many years, I lived my private life, while the painting lived its own life,” Vrubel told The Calvert Journal in 2014. “In the early 2000s, people started bringing back souvenirs from Berlin – magnets, mugs, and the like – with the ‘Kiss’ on them, which were now being sold not just at the East Side Gallery, but all over the city.”

The artwork was destroyed in 2009 when the Berlin authorities were conducting renovation. This upset Vrubel, who then painted a new version of ‘The Kiss’.

His death was announced by several Russian journalists on Monday morning.

The artist’s wife, Viktoria Timofeyeva, wrote on social media last month that Vrubel had been hospitalized with complications from Covid-19, and his health had deteriorated significantly.