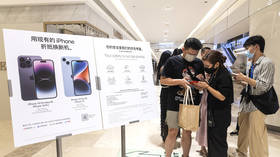 Following an update on Wednesday to its iOS operating system, Apple will limit the ability of iPhone users in China to share files wirelessly with groups of strangers, a controversial move some believe is an effort to placate the Chinese government.

AirDrop is a function that allows users to send and receive files between Bluetooth-capable Apple devices, which are detected within a 328-foot range even if the devices’ owners have not previously had contact. 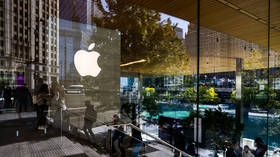 The new limit is meant to curb unwanted file sharing, according to Apple, and the company said it plans to roll out the update worldwide in the coming year. However, Bloomberg speculated on Thursday that it was a gift to the Chinese government from Apple.

While AirDrop can be abused – ‘cyber-flashing’ became an unwanted trend in 2017, leading New York City to take steps to ban it – users concerned about unsolicited contact have the option of making themselves discoverable only by people they’ve added to their contacts, or invisible to all.

However, AirDrop was also used by protesters in Hong Kong to send messages to tourists from mainland China informing them of the reason for their demonstrations. Because it operates using Bluetooth rather than the internet proper, the feature is not subject to government censorship.

The use of AirDrop to send subversive messages was reported again in the last month by Western media eager to seize upon any signs of popular discontent with premier Xi Jinping’s rule, as the leader recently secured a third term as head of the Chinese Communist Party.