EU citizens are feeling the pain instead of Moscow, president says 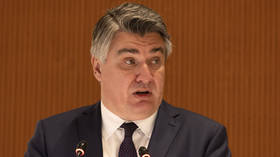 The Russian ruble is getting stronger while the EU citizens have to cope with higher prices due to sanctions that simply don’t work, Croatian President Zoran Milanovic complained on Tuesday. He called the EU explanation for the partial oil and gas embargo “insulting” and said Croatia had little pull within the bloc, unlike its neighbor Hungary.

“The sanctions aren’t working. Russia isn’t feeling them, the ruble did not collapse. EU citizens get to pay the price, [Russian President Vladimir] Putin gets to smile in contentment, and the oil and gas will go elsewhere because the demand is great,” Milanovic said in Zagreb, commenting on the EU’s latest additions to the anti-Russian embargo.

He added that the EU sanctions in their current form “wouldn’t be effective even against Serbia” and that the only thing likely to happen is higher prices for citizens of EU countries.

EU leaders on Tuesday agreed to a new sanctions package that would ban import of all Russian oil delivered by ship – but not by pipeline – and stopped short of banning the import of natural gas.

“The key player is Hungary,” Milanovic said, pointing out that Budapest was responsible for the pipeline exemption. The reasons the EU cited for not embargoing Russian gas were “an insult to common sense,” he added. 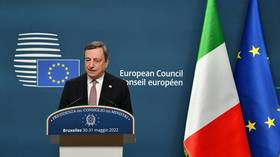 Meanwhile, Italian PM Mario Draghi claimed that Western sanctions will have “maximum impact” on the Russian economy “from this summer onwards.”

Speaking after the meeting of EU leaders in Brussels on Tuesday, Draghi said the oil embargo will affect international trade “for many years, if not forever.”

Brussels doesn’t care what Croatia thinks because Croatia doesn’t bother asking questions, Milanovic lamented, arguing that Zagreb can’t even recognize its own interests – and when it does, won’t bother championing them.

In April, the Croatian president said that unless the US and the EU guaranteed the rights of Croats in the neighboring Bosnia-Herzegovina, Zagreb would block the NATO applications of Sweden and Finland. However, the nationalist HDZ party, which has the parliamentary majority, ruled out such an action. Instead, it was Turkey that held up the NATO bid of two Scandinavian countries, citing their alleged support for Kurdish militants.