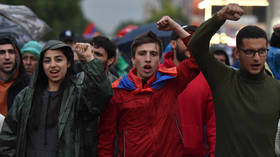 A large crowd of demonstrators calling for the resignation of Armenian Prime Minister Nikol Pashinyan has surrounded the Security Council building in the capital city of Yerevan on Wednesday morning.

Armenia has been gripped by protests for a month now as the opposition blames Pashinyan for trying to hand the disputed region of Nagorno-Karabakh over to Azerbaijan.

Minor scuffles broke out as the crowd marched through the downtown towards the Security Council’s headquarters, news agency RIA-Novosti reported.

The protesters then surrounded the government building, using the same strategy as during the siege of the Foreign Ministry on Tuesday, when the crowd made sure that the opposition MPs could make their way into the ministry to discuss the situation around Nagorno-Karabakh with two deputy foreign ministers.

But this time the police told the demonstrators that the Security Council building was empty, and soon thereafter the protest leaders told their supporters to leave the premises. 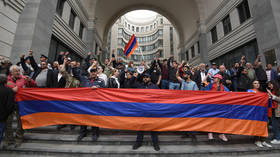 The aim of the failed action was to pass the opposition’s demands about Nagorno-Karabakh to the members of the Security Council, said MP Aram Vardevanyan from the Armenia Alliance political coalition.

“Nagorno-Karabakh can’t be part of Azerbaijan and the authorities shouldn’t take steps that contradict Armenia’s interests,” the opposition MP insisted.

The latest wave of protests began on April 25 after Pashinyan said that the international community wanted Yerevan to “lower the bar” regarding its claims to Nagorno-Karabakh.

Last week, the Armenian PM met Azerbaijan’s President Ilham Aliyev in Brussels, with the two agreeing to “advance discussions” on settling their differences on Nagorno-Karabakh.

The neighbors fought a 44-day war over the disputed region in 2020, with Azerbaijan capturing some parts of Nagorno-Karabakh, which had been controlled by Armenians since the early 1990s. Mediation by Moscow led to a ceasefire, with Russian peacekeepers deployed to the area.