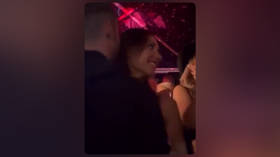 Finnish tabloids reported on Friday that a new video of the country’s partying prime minister, Sanna Marin, had surfaced online.

In the footage, she can be seen dancing in a club with a man, who was identified by the local press as rock singer Olavi Uusivirta. Some outlets questioned the propriety of the encounter, considering that the 36-year-old leader is married. Uusivirta is divorced.

Earlier this week, a series of videos popped up online showing Marin and some other Finnish public figures having a good time at an apartment and in clubs in Helsinki.

Some people took issue with shouts heard in the background, in which the revelers apparently described themselves as a “flour gang.” “Flour” can refer to cocaine in Finnish slang, so MP Mikko Karna suggested that Marin should take a drug test to quash any speculation about possible drug abuse.

The prime minister herself addressed the videos on Thursday by stating that she did not use illegal substances. She said she regretted that the videos, which she had expected to stay private, were leaked for everyone to watch.

On Friday, she announced that she had taken a drug test and the results would be published next week.