Earlier, a man with an SS-style patch was present among President Vladimir Zelensky’s security detail 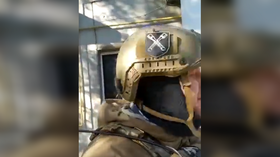 Footage of a Ukrainian soldier, wearing an insignia of a notorious SS brigade, emerged online this week, as the Kiev forces moved towards the city of Kherson following withdrawal of the Russian troops.

The videos, presumably posted online by the soldier himself, show the Ukrainian fighter sporting on his helmet the patch with two crossed stick hand grenades – the emblem of Dirlewanger Brigade, known for mass murder of civilians and other war crimes committed during World War II.

The display of insignia, popular among neo-Nazis, has met a mixed reaction online, with even some of those who support Ukraine in the ongoing conflict condemning the soldier’s choice, given the especially brutal record of the SS brigade.

Known as the Black Hunters, and later into WWII as the 36th Waffen Grenadier Division of the SS, the brigade was a penal unit composed of convicted criminals and led by a notorious war criminal Oskar Dirlewanger. The brigade is known for its role in suppressing the Warsaw uprising and the Wola massacre – the indiscriminate and systematic killing of between 40,000 and 50,000 civilians, including women and children, in the Wola district of the Polish capital.

The display, however, appears to be not an isolated incident, with at least one more soldier sporting the same patch captured on camera during the advance on Kherson. The footage with him is circulating online as well. Apart from that, an armored vehicle, flying a black flag with a stylized Nazi Germany’s Imperial Eagle, was spotted in Kiev’s ranks. Unlike the original Reichsadler, who carried the Nazi swastika in its claws, the eagle in the Ukrainian flag had the Black Sun instead. The symbol is extremely popular among assorted neo-Nazis and is incorporated into the insignia of the notorious Azov regiment.

Kiev has denied the presence of any neo-Nazi elements in the country’s military, bluntly dismissing such assertion – and the goal to “denazify” Ukraine proclaimed by Moscow – as “Russian propaganda.” Despite that, Ukrainian soldiers sporting various neo-Nazi symbols have repeatedly made it even to official imagery released by the country’s authorities.

For instance, a soldier wearing an SS-style patch, closely resembling the one used by the 3rd SS Panzer Division ‘Totenkopf’, was spotted among President Vladimir Zelensky’s security detail back in September. After the photo got viral, the presidency quietly removed it from all platforms it had been released onto without providing any explanations.