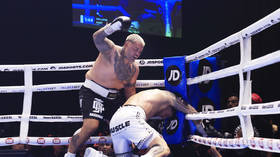 Former New Zealand All Black rugby star Sonny Bill Williams has suffered the first loss of his professional boxing career after he was knocked out by former UFC title challenger Mark Hunt in a stunning upset in Sydney, Australia.

Williams, 37, had amassed a 9-0 record in the boxing ring since making his debut in 2009 but has concentrated his focus entirely on prizefighting since he retired from rugby in 2019, having amassed 58 caps for the All Blacks. He has been training alongside Irish world champion boxer Andy Lee, who has also trained the likes of world heavyweight champion Tyson Fury.

The World Cup-winning star had been expected to ease past the 48-year-old Hunt, who was beaten in the ring in 2020 by Williams’ rival Paul Gallen. The former UFC title challenger’s famous power proved to be the difference, however, when he landed a thunderous fourth-round shot, causing Williams to stumble backwards against the ropes and prompted the referee to call off the fight.

This came after Williams had collapsed to the canvas earlier in the round following another Hunt assault. It was Hunt’s first-ever win in a professional boxing match.

“I would like to say it was an honor to share the ring with Mark Hunt tonight, the Super Samoan,” Williams said afterwards. “I tried my best, but it wasn’t good enough.

“Not too much positives to take from that, but to share the ring with a legend like Mark, it was special.”

Hunt, meanwhile, announced his retirement from all forms of combat sports after the win.

“I’m smiling not because of the win, but I’m smiling because this is the last time I walked into a ring of combat of any sorts,” he said.

Hunt last fought in mixed martial arts in 2018, when he compiled a 13-14-1 (1) record, fighting the likes of Fedor Emelianenko, Brock Lesnar and Mirko Cro Cop along the way.

He is also a former world champion kickboxer, and won the highly-regarded K-1 World Grand Prix back in 2001.

Williams, meanwhile, is regarded as one of the New Zealand All Blacks’ best-ever centers and is credited with having been a central cog in an All Blacks side which dominated world rugby throughout the majority of his playing career.